Your search for the best Buddhist Tour packages in India ends here! India – the glorious land known for the intersection of many cultures, faiths, and traditions it holds, quite in harmony with its time-honored role as the spiritual center of the whole world, is also the birthplace of Buddhism, the beautiful spiritual path ordained by Gautama Buddha 2600 years ago to help human beings a way out of their incessant participation in the sufferings of the mortal world. It doesn’t come as a surprise then that three out of the four principal Buddhist pilgrimage destinations a student, follower or enthusiast of Buddhism ought to travel to are in India.

Hardly does one come across somebody who hasn’t heard of Buddha’s life story. The tale of the naïve Prince, shielded from the knowledge of the sufferings of the world, setting off on a spiritual quest after he was revealed of the same relinquishing the comforts and sureties of his royal life has now become a cliché. What follows is one of the most arduous yet ardent trajectories of spiritual seeking, through the many contours of extreme asceticism, ancient Vedic philosophies, and meditational practices, only to have Siddhartha arrive at his own Buddhahood through the Middle way. The places that characterize major turning points in the life of Buddha, who shone brightly as the greatest of spiritual Teachers following his enlightenment, are Lumbini, Bodh Gaya, Sarnath and Kushinagar.

Among these four cardinal destinations, Lumbini is the only site located outside what now forms the geopolitical boundaries of India. Lumbini Gardens mark the birthplace of Siddhartha in Nepal. It is at the sacred soil of Bodh Gaya, under the shade of a Bodhi Tree, that Siddhartha sat engaged in meditation, resolved to not move till he attains enlightenment, unwaveringly for forty days. Siddhartha’s metamorphosis into Buddha culminated at Bodh Gaya. While Sarnath is the site at which he initiated his own journey as a spiritual Teacher, with his first delivered sermon that successfully convinced four of his prior spiritual companions to the efficacy of this noble path to attain supreme liberation. Kushinagar in Uttar Pradesh, the holy site wherein the great spiritual choosing to relinquish his mortal body, is revered as the site at which Buddha attained Mahaparinirvana.

Our Buddhist Tour Packages have been meticulously prepared so that you don’t end up merely visiting the major holy sites of Buddhism but also get to immerse in the spiritual sanctity characteristic of its sacred environs. We offer varying tour packages that combine different Buddhist pilgrimage destinations, with or without visits to other major tourist attractions of the subcontinent. Enjoy your Buddhist pilgrimage in India to- the four major Pilgrimage sites of Lumbini, Bodh Gaya, Sarnath and Kushinagar, other holy sites at Nalanda, Rajgir, Kapilvastu, Sravasti and Vaishali, the historically significant caves at Ajanta-Ellora and many more with us at the best prices. May your pilgrimage to the holy birthplace of Buddhism delve you deeper into the mystical, spiritual pathways illumined by this sacred path! 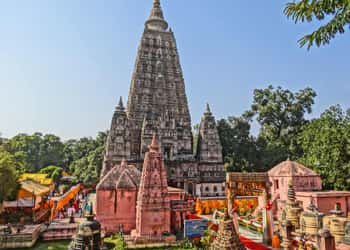